Consumer Credit Performance is Improving, and Demand is Increasing – 2nd In A Series

Despite the shockwaves caused by the COVID-19 outbreak, the consumer credit industry is well-positioned as many areas of the country prepare to reopen this summer.

Consumers are doing well one year after the pandemic began, according to the TransUnion (NYSE: TRU) Industry Insights Report, which revealed that major delinquency rates are mostly down and loan originations are continuing to rise from COVID-19 lows.

The advancements are taking place against the backdrop of a pandemic that has created one of the most significant economic shocks in American history. The unemployment rate was 4.4 percent in March 2020. It soared to 14.7 percent in April 2020, the highest level since 1940. As a result of this substantial increase, loan originations have slowed dramatically. In the early months of the epidemic, several lenders tightened their requirements, and consumers resisted taking out new loans. Unsecured personal loan originations, for example, fell from 3.9 million in Q1 2020 to 2.6 million in Q2. In the same span, credit card originations fell even quicker, from 15.5 million to 8.6 million.

More gains are expected in early 2021, according to several indicators. The University of Michigan Consumer Sentiment Index increased from 76.8 in February 2021 to 84.9 in March 2021, thanks to government programs and rising jobs. Personal consumption expenditures grew 4.2 percent in March, according to a report from the Commerce Department’s Bureau of Economic Analysis (BEA). In 2021, Oxford Economics predicts a 9.6% increase in real consumer spending.

More loan activity has resulted from the economy’s sustained development. Credit card originations have increased from the lows of Q2 2020 to 12.3 million (Q3 2020) and 15.5 million (Q4 2020) in the last two quarters (8.6 million). Serious delinquency rates are reaching historic lows as credit demand surges. In Q2 2020, lending and credit usage slowed, but government stimulus and forbearance initiatives resulted in an unusual dynamic in which significant delinquency levels have largely decreased despite high unemployment. 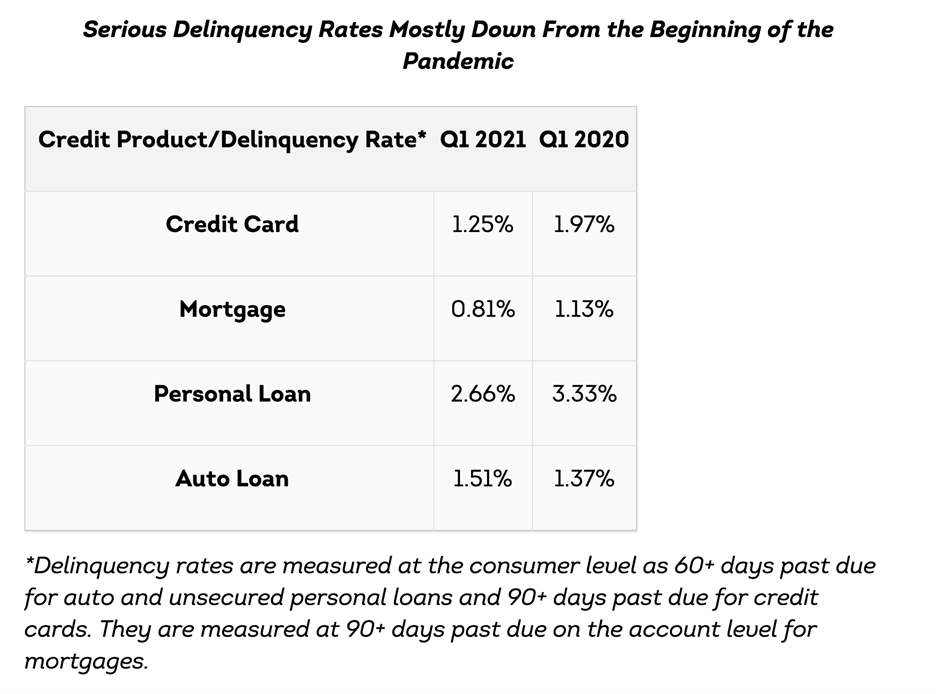 “This last year has been like no other, but in many respects it has highlighted the wherewithal of the U.S. consumer to persevere under the most extreme conditions,” said Matt Komos, vice president of research and consulting at TransUnion. “Consumers and lenders, alike, took more prudent measures with their credit use. Buoyed by government stimulus programs, many consumers used their benefits to remain current on accounts. As we near the first half of the year and more of the country opens, there is a strong sense that pent up demand for new loans will lift the consumer credit market even higher.”